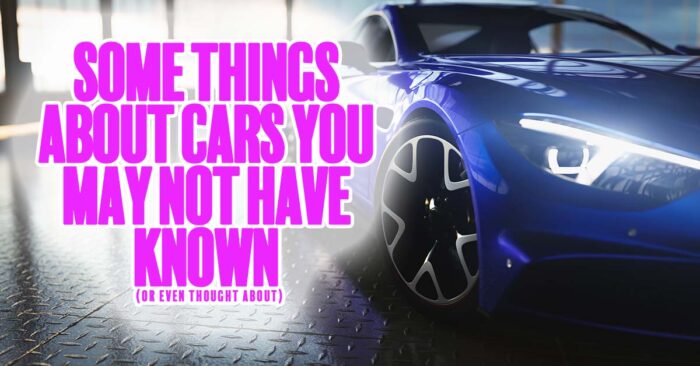 Do you think you know your way around a car? Here are some things about cars you may never have thought about or considered.

Electric Cars Are Not a New Concept

You would think from the news and commercials you hear that electric cars are a new concept. Far from it. Electric cars have been around as long as combustion automobiles. The reality is, early on in the history of automobiles there was a format war that raged. Would cars be powered by electric, steam or gasoline? When cheap oil was found in abundance in Texas in the late 1800s, the war ended. Steam and electric lost. Electric, however, is still in the race.

When auto sales lagged in the 1930s during the depression, the auto industry largely blamed the electric streetcar industry rather than the economy. A conglomerate of car companies and oil and tire companies pooled resources to begin buying up streetcar companies, making them less user-friendly. The result was a rebound in car sales. Or perhaps it was the improving economy.

Have you Ever Wondered What That New Car Smell Is?

We tend to romanticize what is referred to as “that new car smell”, when, in fact, it is really a combination of smells of the materials used in creation of a car. This is largely a potpourri of chemical smells that we associate with the achievement of purchasing a new car.

Your Car Knows More About You Than You Think

If you think it’s great because your car remembers your favored seat and steering wheel position when you buckle up, that is just the beginning. The newer your car the more likely it knows about you. This is especially true if you connect your smartphone to it. Carmakers are pretty mum about what your car does or does not know about you and store in its computers. Experts believe, however, it can be hacked and probably should be deleted when selling your car in the future.

Minivans and SUVs aren’t THAT Different. Except in Advertising

Minivans and SUVs are both oversized vehicles made big enough for the entire family and to be versatile. The biggest difference is how they are marketed to the public. Families now perceive a minivan as a form of acceptance, while buying an SUV shows strength and security and vitality.

There is no doubt we love our cars, but we seldom enjoy spending more on them than we need to. That includes our car insurance. Keep your rates competitive by comparing them, and we can help. Contact us for a no obligation quote from one of our independent agents today!