They Don’t Make Cars Like They Used To…and That’s a Good Thing!

November 18, 2019/Comments Off on They Don’t Make Cars Like They Used To…and That’s a Good Thing! 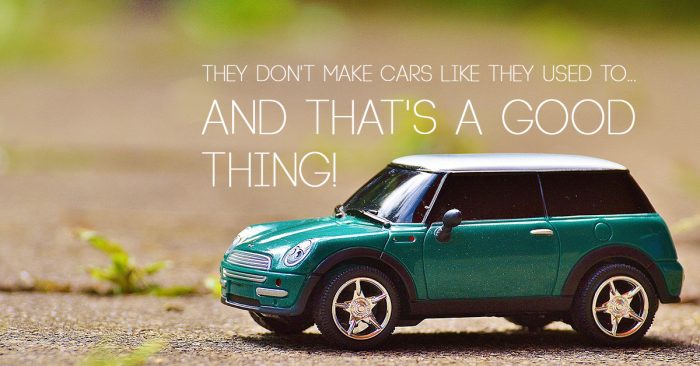 They Don’t Make Cars Like They Used To…and That’s a Good Thing!

If you love classic cars and enjoy going to car shows, you may have heard yourself or others saying ”They don’t make cars like they used to.” That statement is absolutely true. It is also probably a good thing

We may have nostalgic feelings about those old Camaro’s, Mustangs, and Firebirds. We may remember the classic details of those old Cadillacs, Ramblers, and Barracudas but the fact of the matter is automobiles are so superior today, there really is no comparison.

Memories and some would say styling aside, today’s automobiles are so superior the comparison is not even warranted.

If you have doubts, let’s revisit some of those old classics starting with gas mileage. Prior to 1970, nobody paid attention to how efficient cars were on gas. This was mostly because gas was so cheap. Gasoline in the late ’60s could be found from 19.9 to 29.9 cents a gallon. The fact that old muscle cars only got 9 mpg wasn’t even a blip on the radar. Would you be satisfied if you owned a car that got under 10 mpg today?

Then there are the tires. Decades ago it wasn’t unusual to see cars parked along the roadside with frustrated drivers changing tires. Today it is a reasonably rare sight with tires being produced to last 60,000 miles or more. Speaking of mileage, an older car that could reach 100,000 plus miles was considered a rarity. Today, cars are expected to last 200,000 or more with proper care.

Then there’s the rust. Old steel automobiles often rusted to the point they were undesirable. Chrome bumpers pitted and paint easily faded or had surface rust. We tend to forget that when we see the restored beauties at a car show.

Older cars had interiors that were anything but safe or comfortable. Bench seating was lucky to have seat belts let alone harnesses. Hard steel dashboards and large steering wheels were an invitation to head injuries. There was no safety glass and children were often piled into the back of station wagons to fend for themselves. Yes, those were the days alright.

We may complain about government regulations, but they have increased fuel mileage and safety in American cars tremendously. Car accident fatalities have dropped from just over 50,000 in 1980 to just over 37,000 in 2017. This, in spite of the fact that there are more cars on the road than ever.

Yes, we can admire the craftsmanship, styling, and memories that old cars may have for us. Overall, however, it’s a good thing they don’t make them like they used to.

Have You Made Up Your Mind Or Are You Open to Discussion? Maybe You are In-Between!

There’s an Almost Mystical Power of Understanding Grandmas Have

This Versatile Chicken Cut is an Excellent Alternative to Red Meat

Is There Value in Purchasing Life Insurance on a Young Person?

There are Various Excuses for Not Having Life Insurance