Car-Related Mysteries Solved: The Answers to Questions You Never Ask 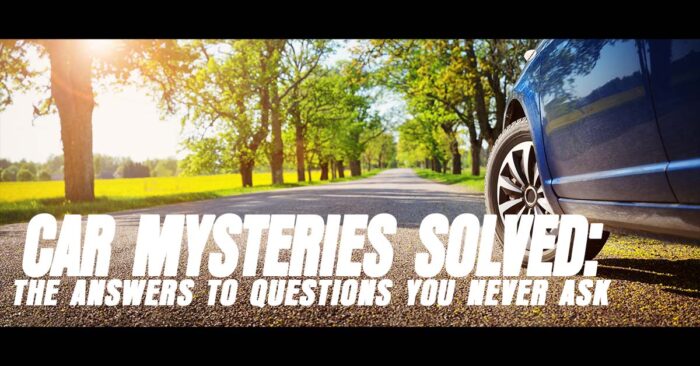 Car-Related Mysteries Solved: The Answers to Questions You Never Ask

Driving and cars are full of mysteries, some of which you may never have considered. Why aren’t car tires not available in colors? Why do they call them “bucket” seats? Here are just some of the answers to the questions you may never have thought about.

Why Do They Drive on the Left Side of the Road in Some Countries?

It is said that driving on the left side of the road started when those walking and riding horses along the roads felt more comfortable keeping their right hands free to carry their swords. Seems like road rage has a long history too! By the way, Americans drive on the right side to be contrary to the British.

Why Do They Call Turn Signals Blinkers?

Manufacturers discovered that if turn signals went on and off, they were more likely to be seen by following drivers. This new invention was referred to as “blinkers” because they resembled the blinking of the eyes.

Why Do They Refer to Car Hoods As Bonnets in England?

Why Do They Call Them “Bucket” Seats?

Early single seats in cars were fairly high, were rounded and had higher sides. This gave them a resemblance to “buckets” and the name stuck. Today, “bucket seats” are more likely to resemble furniture than buckets.

Why Are Car Tires Black?

Many are unaware that the raw rubber used in making car tires is actually a milky white color. So why then, are tires black? It is due to the carbon black additives added to the mixture which help stabilize the material, making tires stronger and more reliable. The black tires also better resist damage from UV rays.

Why are Engines Rated in Horsepower?

What’s the Best Way to Save on Auto Insurance?

The answer to this mystery is easy. Compare. Our independent insurance agents can help you do just that. When you compare rates and coverage, you can make a better decision when it comes to car insurance! Connect with us today.