Weird Facts About Our Presidents You May Not Have Known 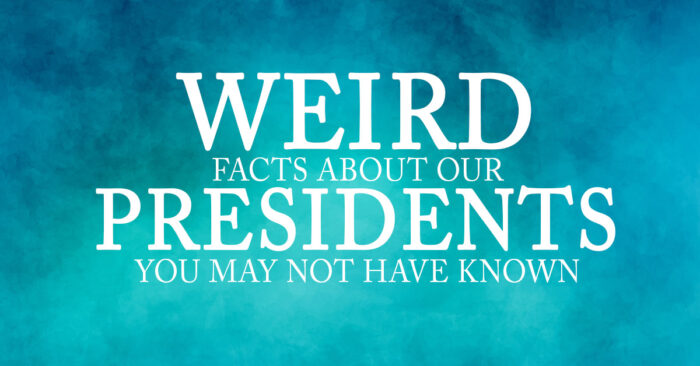 Weird Facts About Our Presidents You May Not Have Known

Our American Presidents have been short, tall, heavy, and slim. They have been married, single, and divorced. They have come from various backgrounds and differing states. Here is a quick look at some weird and interesting facts about our presidents you may not have known.

You may have guessed that Abraham Lincoln was our tallest president. At 6’4” he was a full foot taller than our shortest President, James Madison who was a mere 5’4”.

William H. Taft was, by far, our heaviest president weighing in at 340 lbs. The next two heaviest include Grover Cleveland at 260 and Donald Trump who weighed in at 239. Four other presidents, including Chester Arthur, Bill Clinton, Teddy Roosevelt, and Lyndon Johnson all weighed in at over 200 lbs.

While determining left-handiness is difficult for our early presidents at least 8 have been determined to be south-paws. These include recent presidents like Reagan, Obama, Clinton and George H.W. Bush.

James Buchanan, who served just before the Civil War, was the only lifelong bachelor to serve as president.

About seven US Presidents had red hair, although some only in their youth. Redheads include Washington, Jefferson, Jackson, Van Buren, Hayes and Coolidge.

At the time, George Washington, John Hancock and Benjamin Franklin may have been the three wealthiest Americans in the country.

Fifteen of our presidents were vice-presidents before becoming the leader of our country. Only two, however, did not achieve the honor immediately after serving as VP. Richard Nixon and Joe Biden share that distinction.

Twenty-one states have been the birthplace of a President. Eight have been from Ohio.

Generally, our presidents have been wealthy, married and have either careers in politics or the military. They have also all been men.

Millard Fillmore, the 13th President of the United States was the last President not affiliated with either the Republican or Democrat party.

Although George Washington supervised construction of the original White House, he never lived in it. That honor went to John Adams and his wife Abigail. Initially, a mansion in Philadelphia served as executive offices until the White House was completed in Washington, DC.

Presidents have been loved and challenged. They have had buildings and highways named after them and statues created in their honor. Many have commonalities and others have stood apart. They all have served as the leader of the greatest country on the planet.