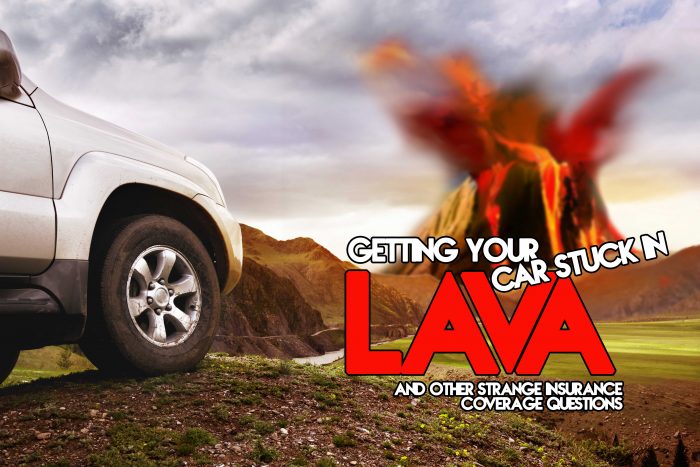 You’ve probably never thought about what would happen if your car was consumed in lava, but that doesn’t mean it’s not going to happen. Lava, sinkholes, fires, they happen. Is your insurance going to cover you?

First: Your Home Probably Isn’t Protected from Lava, But Your Car Might Be

The thing about lava is that it’s mostly predictable. If lava hit your home, you’re probably in a high risk lava zone, which won’t be protected by homeowner’s insurance. That being said, if lava strikes out of nowhere, in an area where it really wasn’t expected, then you might be covered… under your fire insurance. It’ll become a battle regarding whether the fire consumed your house first, or the actual rock did. Hope for slow flowing lava.

But What About a Pest Infestation… In Your Vehicle?

Pest damage for a home is sometimes covered. But what about pest damage in a vehicle? Again, this is where comprehensive insurance really comes in… and where paying for the minimum insurance can come back to haunt you.

Collision and liability insurance will protect you if you run into a wall, car, or (hopefully not) person. But collision coverage doesn’t protect you against the weird things that can happen to your car, such as your tires being slashed, mold growing on a hot summer day, or rats making your engine their home.

…Or a Sinkhole in Your Yard?

Sinkhole damage is damage to your property, right? So would it be protected under home insurance? Actually…

Luckily most people don’t live in an area where sinkholes are likely. But it’s still something that can happen almost anywhere.

…Or a Wildfire on Your Wedding Day?

If you’ve had your wedding plans canceled because of things like fires, overbooking, or other disasters, call an independent insurance agent. They may be able to help you recover some of the money you put down for payments and deposits.

All-in-all, insurance covers a lot more than you think. But there are also notable gaps that you might not realize. You need to talk to an independent insurance agent to make sure you’re covered completely.